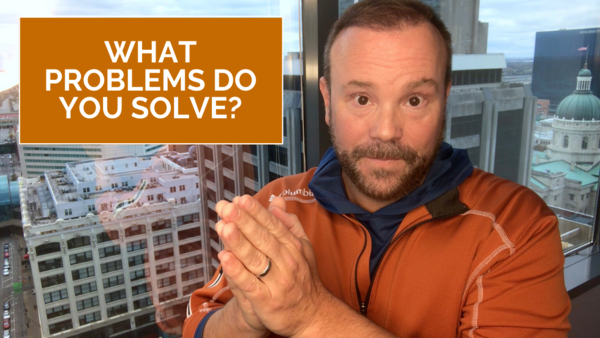 What Problems do you solve?   Okay, so let’s talk about testimonial video production from the perspective of the sales team, because after all, this is who it’s for, right? The whole point of a testimonial video is to move prospects further down the funnel so that they can have an actual conversation with your sales team. And trust is the number one thing in any relationship. It’s the most important thing that you can have with any client. The problem is that most purchase decisions are made before a person actually has trust. They’ve just gotten to the point where they’re willing to take a leap of faith that this is going to work out the way that they hope it will.

So how do you get them to the point where they’re willing to make that leap? Well, most sales people will tell you that next door to trust lives rapport and it’s an easy jump from one to the other, and the best way to establish rapport in a testimonial video is by presenting a shared problem. Because if you come up front, and start at the beginning with this, with a problem that your prospect recognizes, you’re going to capture their interest immediately because you’re going to say, “Well, I have that problem too. You sold that for somebody else. Okay, what does that look like and how did you do it?”

And don’t make assumptions about what their problems are. Go to your salespeople and ask them. Okay? Because your sales people know. They deal with these problems every single single day. They solve these problems every single day. So don’t make assumptions about what those are. Ask your sales people to get involved about saying these are the problems that we solve for our clients. And when you do your testimonial video, lead with the problem. Don’t do anything else. Don’t talk about yourself. Don’t talk about solutions. Talk about the problem. Capture their interest right up front. Then you can develop a sense of rapport. So if you’ve got questions about testimonial videos, email me at [email protected]