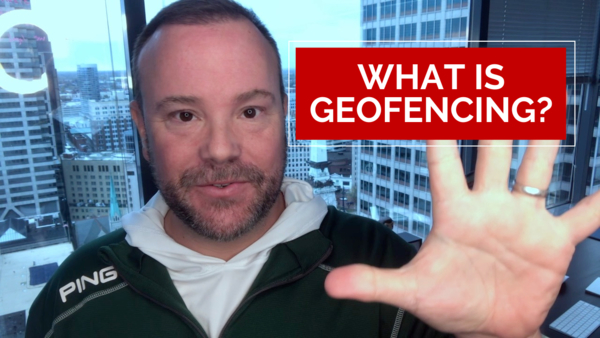 Okay, so what is geofencing? I’ve been getting this question a lot recently, so I thought I’d answer it here. And there’s basically five different steps to answer, “What is geofencing and how does it work?” And the first is the user enters a location. Right? And usually we use it for conferences and conventions and trade shows, where people know that a lot of their prospects are going to be there at the same time. But you can also use it for concerts and sporting events. You can even target, let’s just say, a million home addresses where you want your ad to be seen. Any geographic location is what you’re looking at. That’s what the fence is. We put the fence around that and we say we want to show the ad to people that have been in this space during this time.

Which gets you to step two, which is GPS technology identifies the IP addresses of those devices. And it’s usually cell phones. There’s sometimes tablets and with conferences and events you usually get some laptops as well, but usually it’s more than 90% mobile technology.

Step three is the user opens the app. And the reason that I say this is because it is not a push notification. We don’t jam an ad in front of everybody who walks into the space. That’s bad advertising. It’s too aggressive. It does not go over well.

But they open the app, which gets you to step four, which is there are 600,000 different apps that make advertising available on those apps. So we bid on those open inventory spaces within those apps because the user who was in that space during that time, this is the IP address we want to target and this is the ad that we want to target them with.

Which gets you to step five, which is whether they’re at the event or after they leave it, the ad continues to stay with them because their device has been targeted. So whether it’s during the event or for 30, 60, 90 days after the event, they’ll continue to see your ad. And yes, we can change what that ad is during the course of the campaign. So if you wanted to change your message so it progresses as it goes, you can.

So anyway, that’s what geofencing is and that’s how it works. So if you’ve got questions, email me at [email protected]