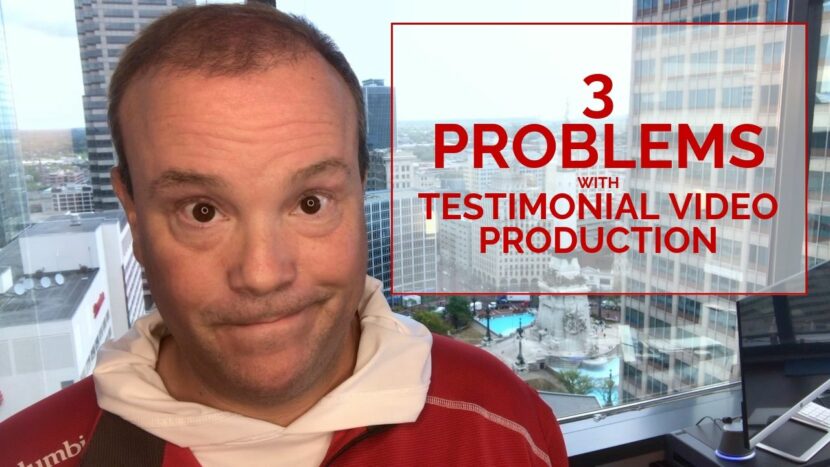 Okay, so there are three big problems with testimonial video production. Number one, logistics. All right, let’s take you for an example okay? You’ve got a client who calls you up, you have a good relationship, you’ve been working together for awhile and they say, “Hey, we’d love to do a testimonial video with you. So we’re going to bring over a producer and a director and a film crew obviously, and a lighting crew. A couple of different cameras and a bunch of lighting equipment. Set that up in your office. Set up some audio equipment too. That’ll probably take a couple of hours and then we’ll interview you for a couple of hours and then we’ll take some B-roll of some shots around your campus. All told we’ll probably be there maybe five, six hours. When does that work for you?” Ain’t nobody got time for that. I know I don’t. Do you? Do you have time to stop down for five or six hours in the middle of a workday to do a friend a favor?

Problem two, performance. I got the opportunity to work for Quentin Tarantino for two years during the Pulp Fiction era, and I’m always taken back to the rooftop scene in Reservoir Dogs where he says, “In this job, you’ve got got to be a great actor. You got to be naturalistic. You got to be naturalistic as hell because if you ain’t a great actor, you’re a bad actor. And a bad actor is some bull$#!% in this job.” Is your client a great actor? And they’re not going to be. It’s not their job, they’re not a performer. But that’s the level of performance that we expect out of somebody professional. So inevitably you wind up with a talking head in front of a potted plant.

Problem three, and this is the worst one of all. Problem three is you. What? What did he just say? That’s true, because you are letting the first two problems get in the way of allowing your sales team to have the best possible tool there is to develop trust with prospects. Which is your clients talking about how great you are. Which is why at Jigsaw Marketing we have developed a system to get rid of the obstacles. We get rid of the logistical problems. We get rid of the performance problems, so that you can not only have one testimonial video, but you can have several and you can get them done efficiently and easily.

So if you’ve got questions, email me at andy@getjigsaw.com.