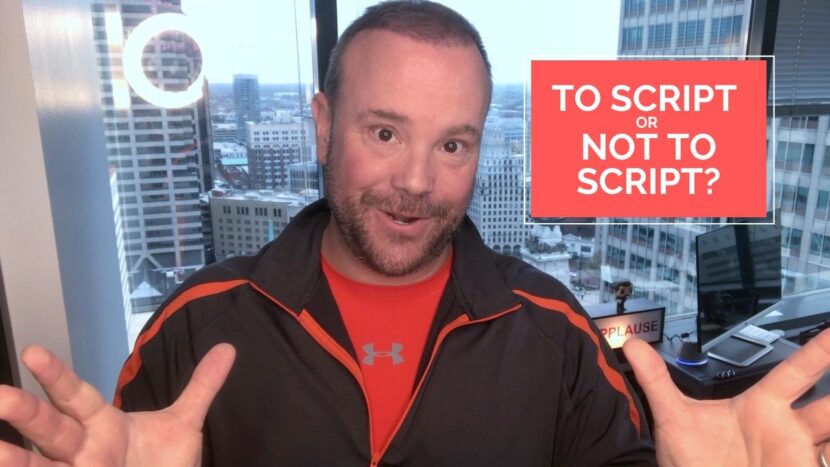 Okay, so let’s talk about one of the big debates in testimonial video production, which is to script or not to script. All right, now I’ll go through the advantages and disadvantages of each. With non-scripting, what you’re looking for is that moment of kismet, that moment of truth, where they come to the realization during the interview process about what they want to say and you get that look on their face and the tone in their voice that sounds really great.

The problem is that one, getting to that point may not happen. And two, there’s a brief window where it can happen because usually for the first 20 minutes of the interview, they’re anxious. You’ve brought people into their office, you brought lighting, you brought sound equipment, you brought a camera, they’re appearing on camera. You always get the comment of I’m too fat. Those are the things that happen during the first 20 minutes of the interview. They’re uncomfortable. And about 30 to 45 minutes into the interview, they start getting tired. You have this brief window where you can get that moment of kismet and if you don’t hit it during that time, it starts to go downhill pretty quickly after that. Those are the advantages and disadvantages of not scripting.

With scripting, the disadvantage is that they can feel like they’re reading and that doesn’t feel good to anybody. You want it to feel organic. You want to feel like this is happening in the moment. What we do to get around that is that we do a pre-interview. And we’ll talk with them about what their experience was, what their problems were, what the result was, what the solutions were, and get that all down. And then you’ve got something that’s five minutes long. Nobody wants to watch a five minute video, you want something shorter so you trim that interview down to the three or four salient points that you want to make. And then you give it to the interviewee and you say, “Does this feel good to you?”

And it’s in their words so it automatically feels good to them. When you start rolling at the beginning, it does feel like they’re reading, but by the time they get to the third or fourth take, what happens is they throw out the script and they just start talking about that one point in their own words. And all the salient details are still there, but it still feels like them. And our experience has been, that’s been a great way to get an interview that doesn’t go on for two and three hours where everything starts to hurt during the interview process for everybody. And you can get it done quickly and efficiently and still have it feel like it’s them speaking on the cuff.

Thanks to Anne-Marie Farrow for a great conversation yesterday, and if you’ve got questions, email me at [email protected]